Our aim was to enhance the community life and the exchange between neighbours, providing an adaptable space for various uses for all year around. To do this we made a horizontal cut through both houses converting the whole ground floor into a big community space. Tearing down part of the front facade and the side walls and replacing it with glass doors, gives the possibility to completely open the space. Both upper houses remain as residential apartments. As we were carving out the walls, we decided to maintain certain brick columns and leave the red Doka poles.

We did this for static reasons but also to indicate a continuation of the position of the entrances, as we decided to keep them at the same place. A wooden beam was placed following the structure of the walls, necessary for our calculated working static system. Adding two steps parallel to the front facade allows the users of the space to sit down and have a quick chat during a break under open sky, but also forms a gradient transition from the exterior to the interior. 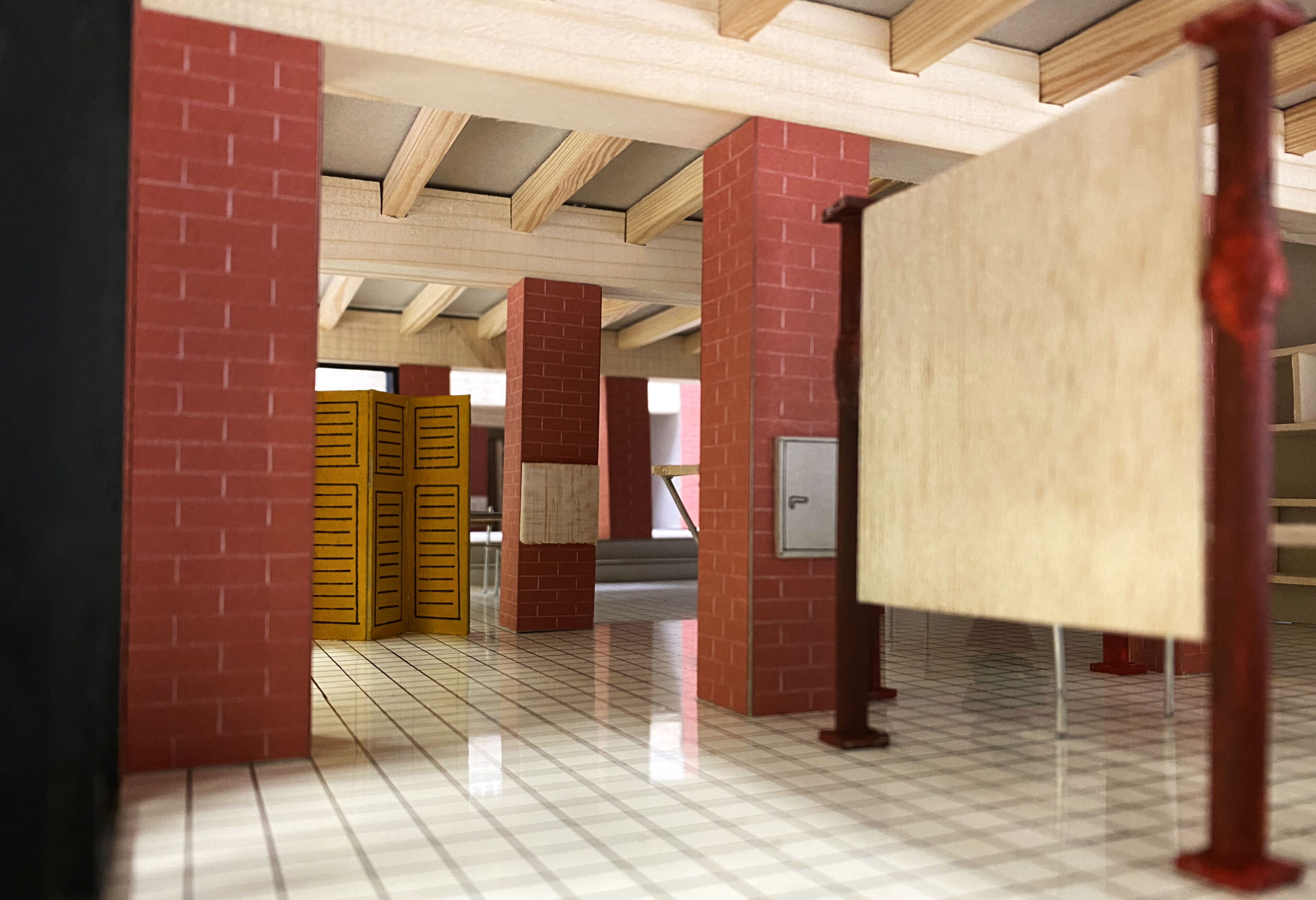 The unused space between both houses was replaced by a wintergarden. The back wall was broken up and the wintergarden pushed through, so people from the houses in the back could access the community space. We also decided to break down the walls enclosing the courtyard, to enhance our idea of an inclusive community space that can be reached by all sites. We imagined multiple activities taking place in the community space at different times of the day. 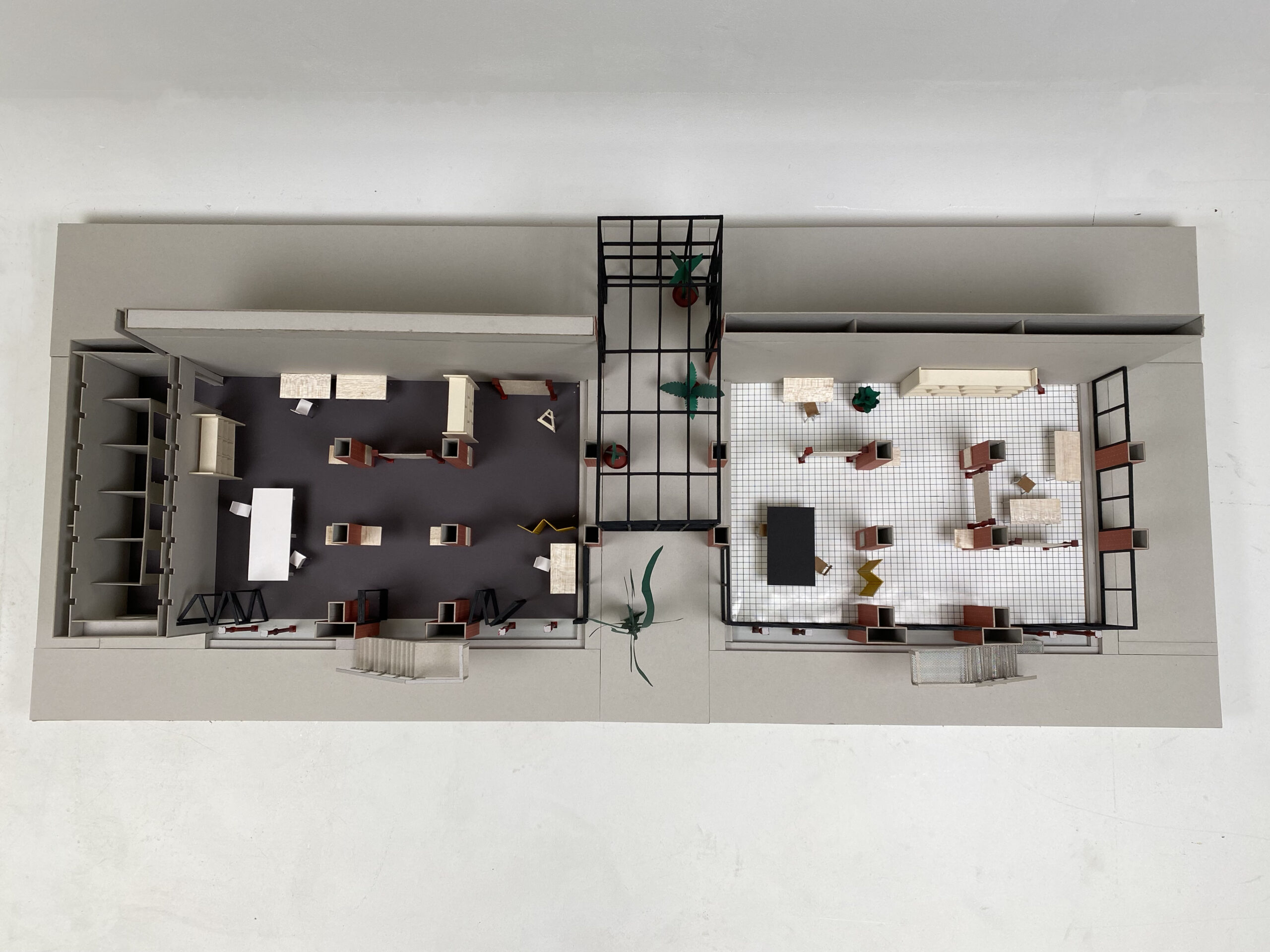 Starting with yoga in the morning, having working tables for unrestricted use available, maybe a pottery class in the afternoon, ending with a small concert in the evening and a flea market in the weekends, the space can be used simultaneously by different groups. The columns in the room and the wooden partition walls make a subdivision of the room possible. By the partition walls not being permanently attached to the ground, they can be moved around, allowing different variations in room size. With proposals for furniture design made out of cheap materials already available and articles from hardware store, we want to motivate people to adapt their environment according to their needs and re-use items.

For example converting a shower into a vocal chamber, the doka poles and a wood plank making up the partition walls or using the scaffold from the building site as a bookshelf. For our re-uses, we operated on different scales, enhancing and pushing certain qualities we thought to be important and also giving a new relationship between the blue house and its context. Picking up one of the themes of the first movement of being observed by all the neighbors, we decided to profit from this situation and install a screen on top of the blue house. A movie can be screened from the two facing buildings at the same time. 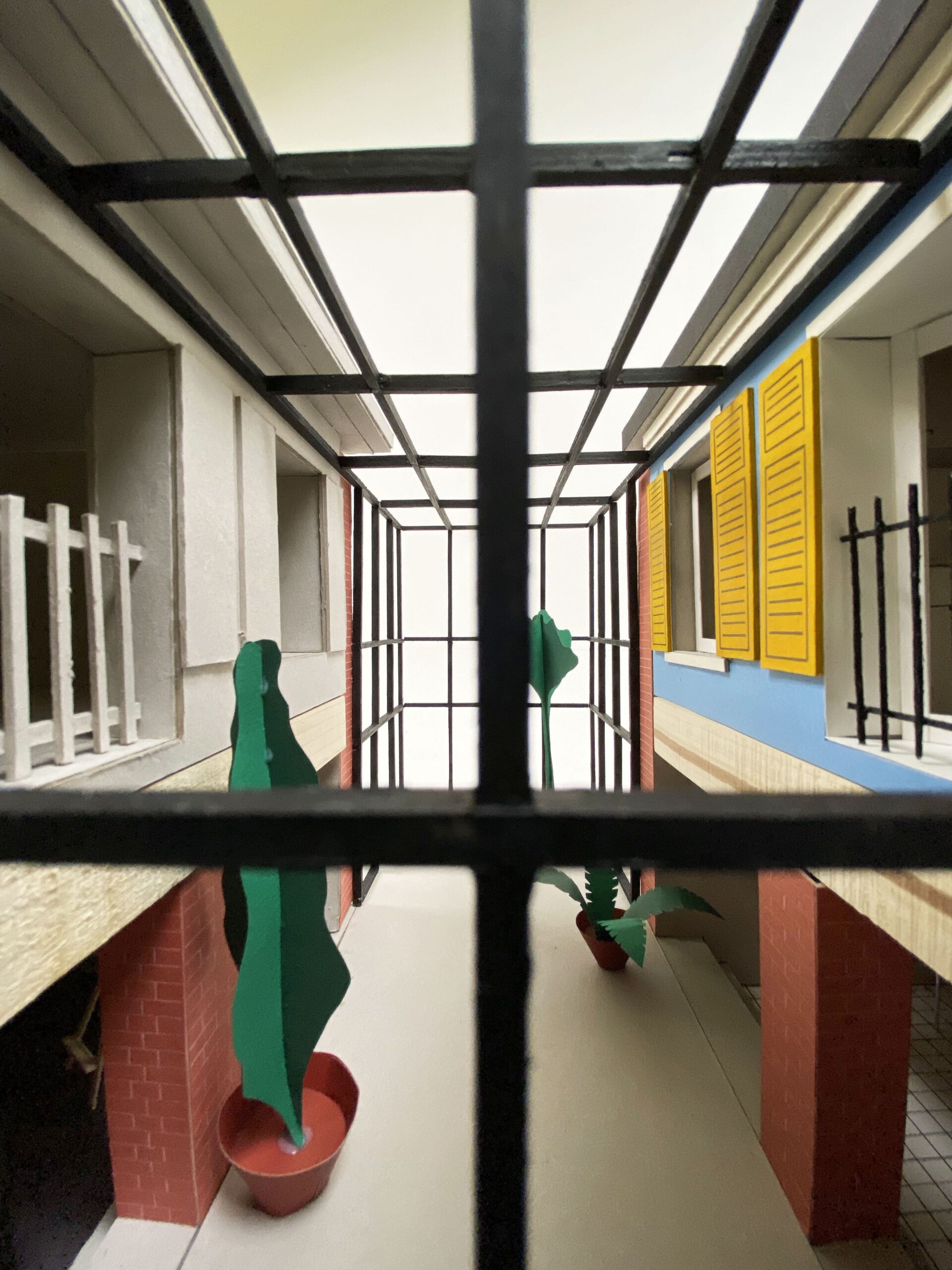 This means that the inhabitants of the buildings without a screen in front of them would need to befriend their other neighbors, organizing themselves to spend an evening together to watch the film. This collective activity involving everyone would strengthen the community feeling. Using the structure of the chimney tray, we installed a pully inside of them, which can be operated from the bottom floor with a crank. Going one step deeper into the private sphere, we wanted to enhance the relationship between both apartments and the downstairs community space. This was done by tearing down the lower part of the wall underneath the window and creating a French balcony. 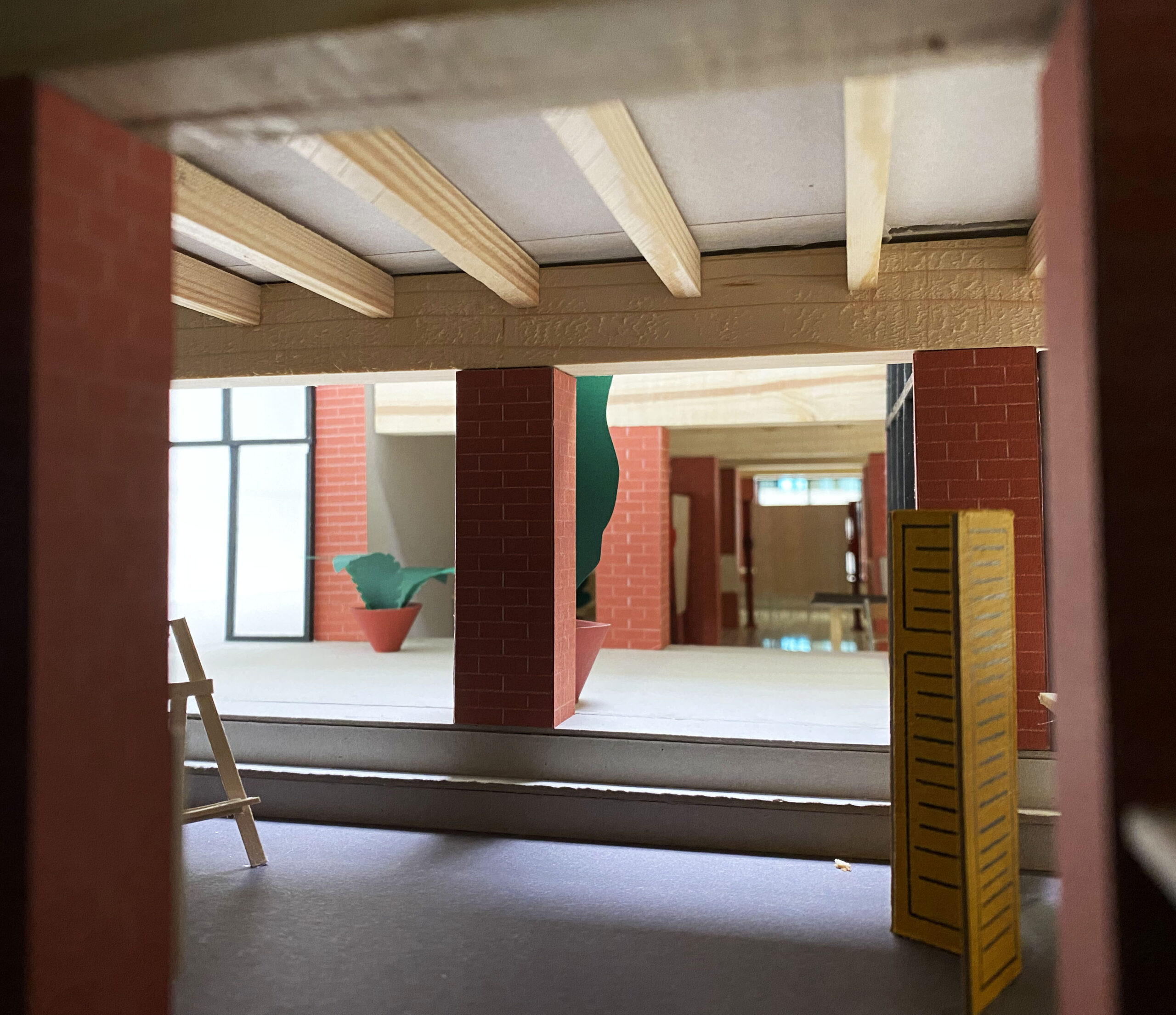 This intervention was done in the middle window of the side wall, at height of the kitchen. This will allow more light to shine into the house, as well as allow communication between inhabitants and users of the community space, pushing their interaction. We then took the grille of the windows below and placed it as a railing. On the most intime domain, we tried to give the living room another quality. We broke down the wall separating it from the corridor, replacing it by a bookshelf and a wooden niche. The niche can be used as a reading nook, a small working table or as an enlargement of the dinner table. By this, the corridor obtains more light and becomes part of the living room. By the living room being expanded, it becomes a central space of the house. All in all, we tried to find a balance between big interventions and smaller ones, always having in mind to better the living conditions of the inhabitants blue house and enhance the community feeling.

Assembly - The Parliament of the Future in a Pacified Middle East 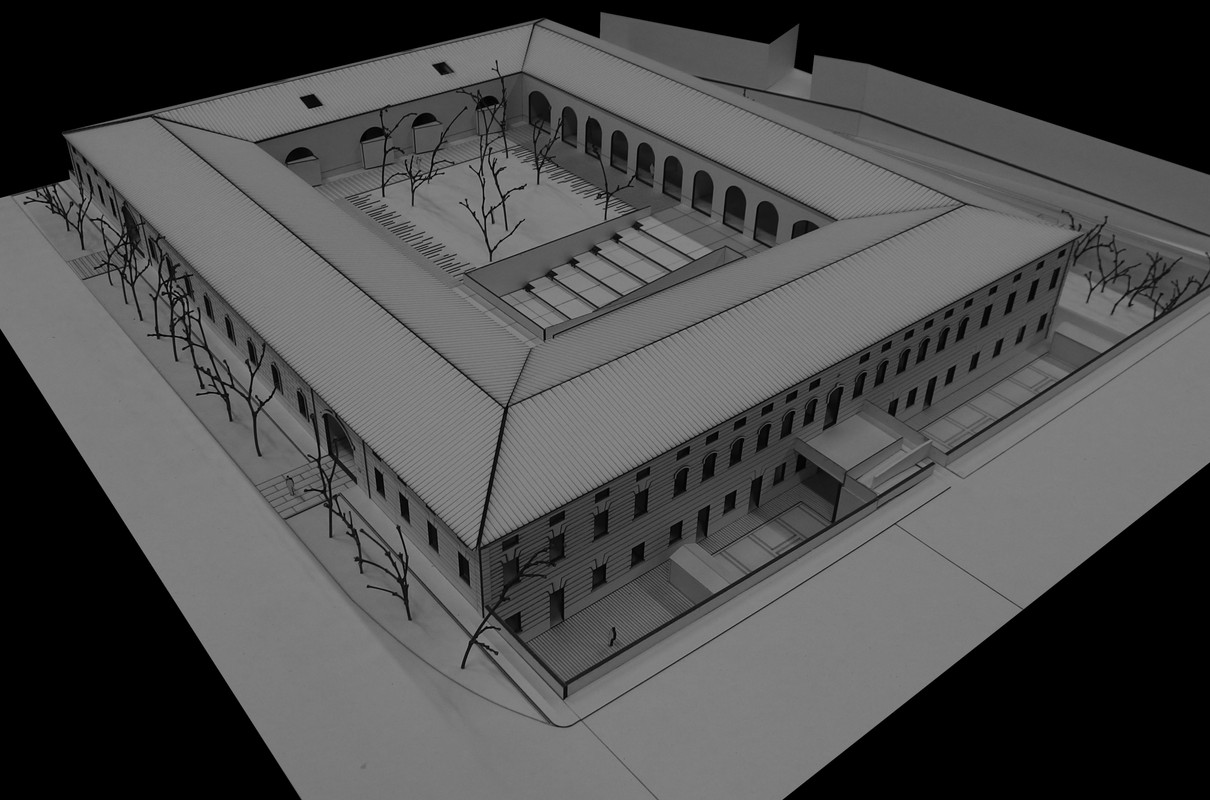 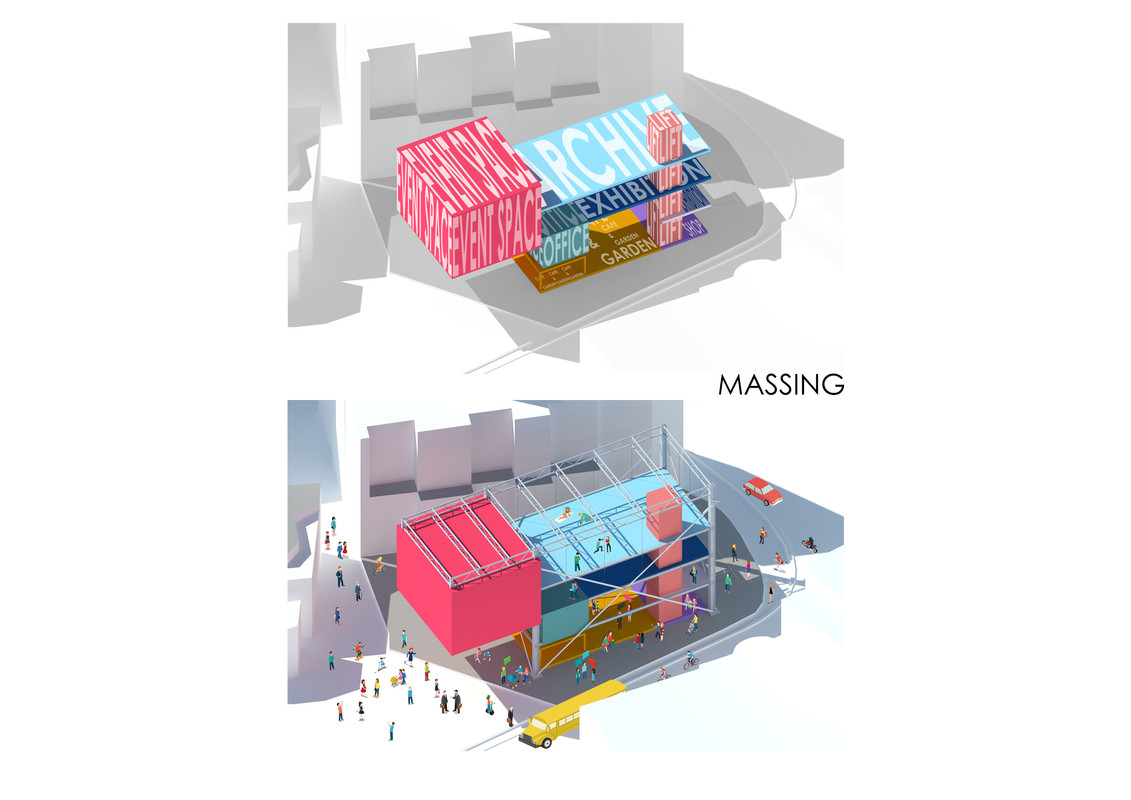 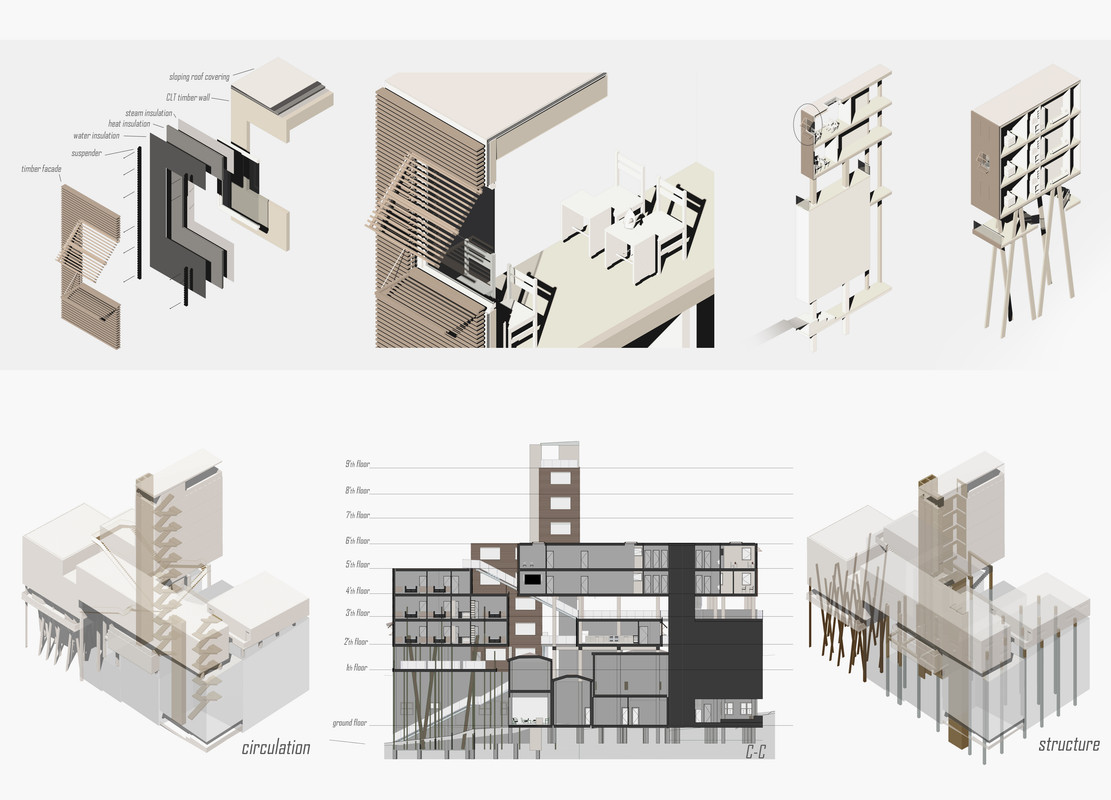 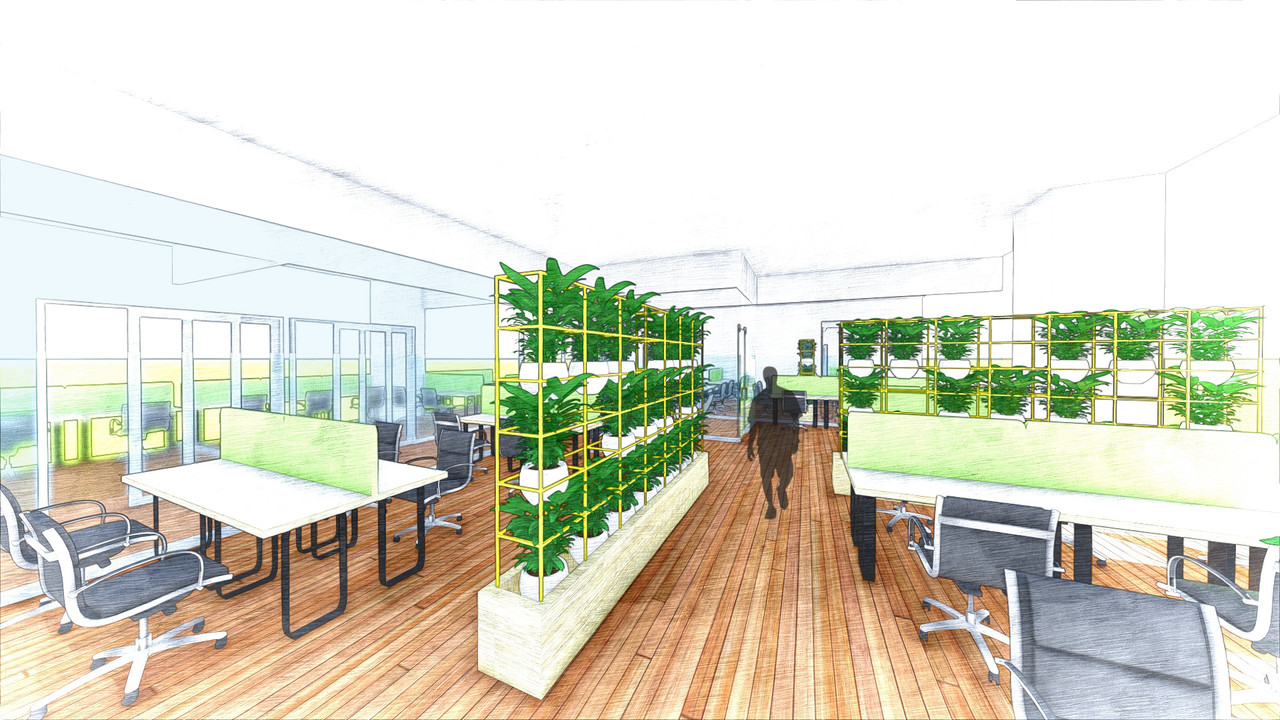